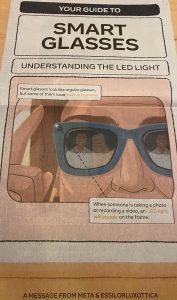 Titled ‘Your Guide to Smart Glasses’, the ad from Meta (aka Facebook) and Essilorluxottica (Ray-Ban’s parent company) explained that smart glasses (such as the Ray-Ban Stories devices that will soon be launched by Facebook Meta) are not recording you as you go about your business.. unless the small LED light in the top corner of the frames is illuminated.

When Google launched their smart glasses a number of years ago, there was a public outcry about the devices invading the privacy of anyone who came within a few feet of the glasses wearer.

This ad is trying to get ahead of a similar outcry arising in the future by educating people. It looks like the product developers believe the public outcry was due to a lack of education, rather than any rational concern.

Personally, while I accept that it is inevitable that such devices will become popular over the coming years, I’m not particularly comfortable with them.

I know people can record us with their smartphones, but that is very obvious and requires a bit of effort. These newer devices allow for a more covert type of recording.

In the not-too-distant future, a voice in my head will be telling me:

“Anyone wearing glasses could be wearing smart glasses.

And anyone wearing smart glasses could be recording me.”

Putting aside my own discomfort, there is the question of our right to, or expectations of, privacy.

Rights and expectations are different things.

Right to privacy: We may expect a right to privacy wherever we go, but our legal rights* are limited when we are in a public space. And a public space may include the local coffee shop. However, our rights change if we go somewhere less public – For example, the toilets of that same coffee shop. Will the people who use these devices understand the difference?

Data protection*: Legal issues may also arise if someone records certain public events and then shares the recording. This is not unique to smart glasses.

The wearer vs the worn-out

Disclaimer: I am not a legal eagle – These are personal opinions. Seek qualified legal advice.